Abstract:OVERVIEW Air brake systems are used on most large ... 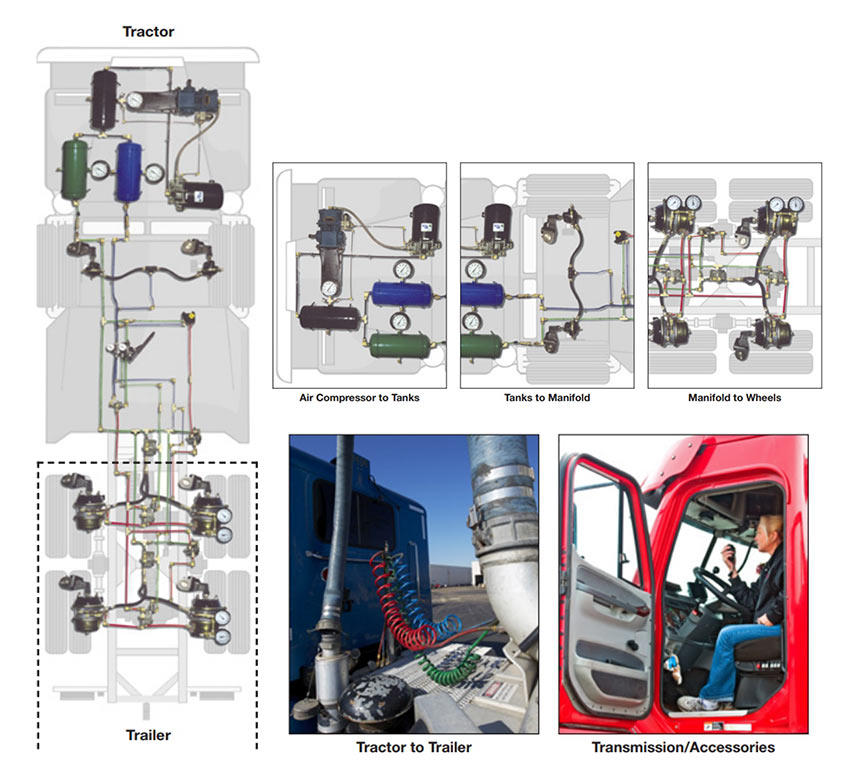 The air used in an air brake system is generated by a belt-driven compressor located in the engine compartment. Air brakes must function whether the engine is running or off so a constant flflow of air is available on demand. Air brake systems are divided into two sub-systems: service and emergency. The service system is used when the vehicle is in operation; the emergency system is used when the vehicle is parked or if the service system fails. As a result, the air from the compressor is stored in a series of tanks and is replenished by the compressor when the pressure in the tanks falls to a designated level.

The compressor system consists of three components: the compressor, the air dryer, and the connecting hose or tubing. Air flow generated  by the compressor can’t be used until it is conditioned. There are two problems with the raw compressed air. First, air coming from the compressor is too hot for standard tubing. PTFE hose is used to connect the compressor to the dryer because it can handle temperatures up to 400°F. PTFE hose can be identified by the stainless steel braid that serves as both the cover and reinforcement.

When there are longer runs of PTFE hose, such as on bus systems, there is the potential for static discharge to build up. This static can blow pin holes in the hose causing hose failure. Because of this, PTFE hose is available in two types, conductive and non-conductive.

The most common is non-conductive and it can be identified by the white inner tube. Conductive PTFE hose has a black inner tube. The carbon in this liner conducts the static charges through thehose, preventing the concentration of static in one location. Steel tubing is used in place of the PTFE hose in some vehicles.

The second problem with the compressed air is that it holds too much moisture. If it doesn’t pass through a dryer, the air from the compressor could cause problems with flow, as well as corrosion of downstream components.

PTFE hoses are sold as complete assemblies in graduated lengths or as bulk components.Fittings can be attached to the hose by crimping, swaging, and with field-attachable fittings.Pre-made assemblies are preferred to avoid of the challenges of dealing with the stainless steel braid and the need for assembly tooling. Bus garages are the most common type of customer making their own assemblies because of the lengths and diameters of hose involved. Making custom assemblies allows the flexibility of cutting hose to length and not having to inventory assemblies of specific lengths.

Once the conditioned air leaves the dryer it is delivered to the tank systems. There are three tanks in most systems: a main tank, a service tank and a reserve tank. The main tank receives the air directly from the compressor system. It acts as a reservoir for the service and emergency tanks. Even though the air is dried before it reaches the tanks it still contains.some moisture. As it cools, the moisture condenses and collects in the bottom of the tanks.Each tank has a drain valve

that is used to bleed the air and moisture that has settled in the tank. Drivers are required to bleed the tanks on a regular basis. The valves have an attached lanyard to make it easier for the driver to activate the drain.

PREV：What should I do if the rotary joint leaks right after it is used?
NEXT：Nut is the most important part of Connector